At the end of 2016 when the nights were long, we were part of several activities that helped light up Bainbridge Island.

At the City Council meeting on January 3, PSE presented the City of Bainbridge Island with a $15,038 grant to retrofit 207 street lights with light emitting diode (LED) lighting. The new LED lights will save the city over $12,000 and 75,193 kWh each year. That is the same as eliminating the greenhouse gases from 11.2 cars each year! 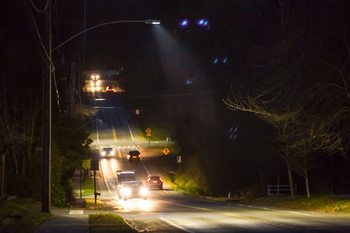 These energy-saving, state-of-the-art investments improve safety by focusing light on sidewalks and roadways, where it's needed most. The light fixtures also reduce sky glow, or upward light, reducing light pollution in the night sky. We are pleased to support the City's energy efficiency goals and encourage you to learn more about the energy incentives and rebates we offer.

Bainbridge Island welcomed a new public art installation in December, and PSE is funding lighting for the installation. "Tribute Baskets" by noted Portland, Oregon artist Christine Clark, features four large, nested metal baskets interwoven with patterns drawn from Suquamish, Scandinavian, Japanese and Filipino cultures. Clark, a professor at the Oregon College of Art and Craft in Portland, was inspired by a visit to the Suquamish Museum and the basketry of the region's indigenous dwellers.

Overseeing the installation is the City of Bainbridge Island's Public Art Program, which is administered by Arts & Humanities Bainbridge. PSE made a $3,200 contribution to provide lighting to enhance the art and improve pedestrian safety. The lighting will be installed by spring 2017.

We're very grateful to Puget Sound Energy for their support of our public art program,” said Anne Smart, Executive Director of Arts & Humanities Bainbridge. PSE's generous contribution toward lighting will enhance both the Tribute Baskets and the Waypoint, for the countless islanders and visitors who pass by each day.”

To view the pieces, you can visit Waypoint Park at 551 Winslow Way E, just uphill from the Winslow ferry terminal. 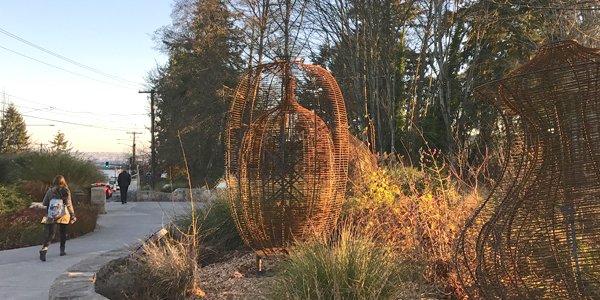 PSE was proud to sponsor the 3rd annual Solstice Walk at the Bloedel Reserve on December 20, 21 and 22. Bloedel's Light the Night Solstice Walk is a candle-lit walk around the reserve, and is hosted with the aim of making the year's shortest days a little brighter,” said Bloedel's Programs & Events Manager, Shayla Miles. Attendees enjoyed hot cider and caroling before walking the reserve's trails with lanterns.

"PSE's ongoing partnership with Bloedel over the past several years has made a tremendous difference,” said Ed Moydell, Executive Director of Bloedel Reserve. It has allowed us to reach more Puget Sound community families through seasonal activities like the Super Squash Hunt, and now, the Solstice Walk. These new ways to connect with nature are becoming family traditions, and they wouldn't be possible without PSE's generous support." 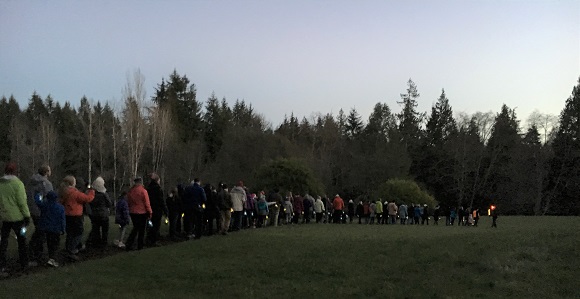 Light the Night has quickly grown in popularity over its three-year history, with tickets usually selling out only hours after going on sale. This year, the event was expanded to three nights, yet the 600+ tickets still sold out in hours! Ticket sales support the event costs and Bloedel Reserve's programs.

To learn more about Bloedel Reserve and its programming, you can visit their website.